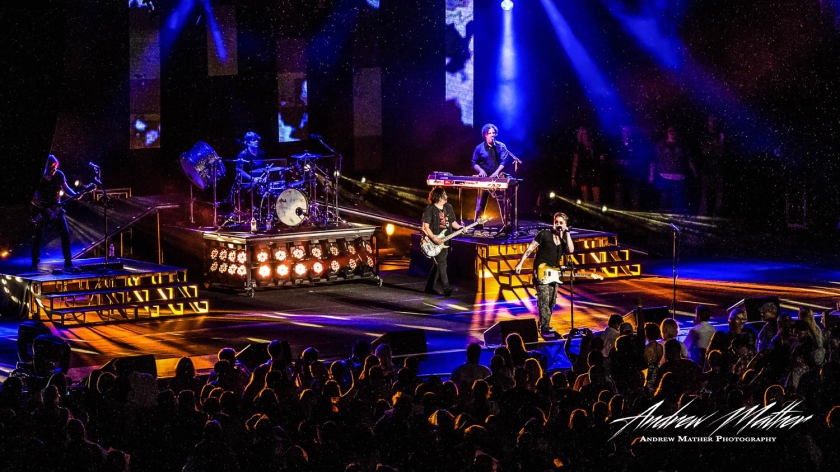 Live Music Reporter Devon Seaman had a one on one phone interview with John Rzeznik, the lead singer of the Goo Goo Dolls.

D: Alright, so you guys have your 20th anniversary tour for the album “Dizzy Up the Girl” coming on.

D: And how’s that been going?

J: Um, every show has been sold out. Most of them are sold out I think, but I think there are still some tickets left for Kansas City. It’s been a lot of fun to play these smaller shows for our really hardcore fans.

D: I do have to say that you’re fulfilling a high school fantasy of mine just by talking to me today. (laughter)

J: Thank you. I appreciate that.

D: So a little bit about the album. If ever there were an album to represent the sound of the late 90’s pop rock, you definitely made it.

J: Thank you very much. I appreciate that.

D: I feel the show is not only going to be geared towards people of my generation, but also the younger generation.  It timeless music.

J: I’m actually surprised to see some teenagers and some in their early twenties showing up at these shows. You know, it’s exciting.

D: How did you come up with the name for the album?

J: “Dizzy Up the Girl?” Well, I’m going to tell you, the honest to God truth. I was driving…. (sound of a baby heard in the background) oh, you got a little baby!

D: Yeah, he’s playing in the back. Sorry.

J: No, that’s awesome! I love kids! Um, I was driving down a street in Los Angeles and I was just rolling down the road and I hit a speed bump and my whole car just went “ba-dum-boom-boom-boom-boom.” And literally that title it just like popped out of my mouth. Right at that point. That’s how I got the title for the album.

D: So it was your exclamation? (laughter)

J: I was like “dizzy up the girl!….what’s going on here?” Now that’s literally how the title came into my head. I rolled over a speed bump and, you know, it jarred it loose. (laughter)

D: That’s always a fun story. I mean, hey it worked! Now, is there a specific song on the album that has more of a special meaning to you than the others?

J: I mean “Iris” was just a huge song and that was when I felt like my songwriting had hit a point where I was like ‘ok, I’m starting to hit a touch of legitimacy in what I do.’ You know? Um, “Acoustic #3”….

D: That’s one of my favorites.

J: …which you know, sort of speaks about my mother. That was sort of the situation. Being even in like the 70’s when-  you know women wanted to get a divorce, it was kind of different back then. There was a lot of shame attached to it. I grew up in very catholic house; a very catholic neighborhood. You know, and my mother had to leave my father. And uh, she was shamed for it.

D: I get it. There were a lot of expectations back then and there was a certain way that people did things. That’s pretty brave that she did end up leaving him.

J: It’s sad because I loved my dad. He had his problems, but he had a good heart.

D: Sometimes things just don’t work out. That’s how life is and honestly that makes for some of the best songs ever written. Just being able to put your heart out there and have others’ receive it.

J: I think the weirdest thing about “Dizzy Up the Girl” is it was one of those records where it was all written around the same time. So I started to notice these themes running through it. Not that it was a concept album or that it was meant to be played as one piece, but the songs are about that specific time in my life and they are pretty personal. Even if they are a little bleak. You know, at times it’s just room for interpretation which is something that I love putting in my lyrics is a bit of room for people to interpret it their own way and make the song their own. That’s something that you aren’t supposed to do in music anymore. You’re supposed to be very direct. Very direct. Like, I’m doing this and I’m doing that.

D: It doesn’t enable the listener to really think.

D: Now how long did it take you to write the album?

D: Is that usual?

J: I learned to work a lot faster over the past 20 years. You know, now the way the world is working, it’s so quick. It’s like you gotta keep moving, you know? I haven’t had a vacation in years.

D: Especially now that you’re a father – which congratulations!

D: Are you loving life?

D: It’s a little boy. He just turned one in September so it’s pretty fun.

D: I mean, it’s a great age just to see them grow and develop.

J: They’re so sweet. My daughter is just entering….she’s going to be two in December and it’s showed up early. I’m like “oh my god….god forgive me for the things I’m thinking about this kid…”

D: (laughter) They test your patience, that’s for sure.

J: Oh my god, they push the lines! And you know, you’re like ‘I gotta go to the book and see what it says’

D: (laughter) Sadly, there is no manual that comes with a baby. You just kind of have to do it to the best of your ability.

J: Yeah, I mean because I know what happened to me when I got out of line. You got the “pow-pow”.

D: Oh no, things are so different these days and I was actually meaning to ask you- you know, it is a scary time to be raising a child, a daughter in particular, with our current political climate. Did you have any reservations when you decided that you wanted to have kids?

J: Did I have any reservations as far as like….well, as far as what?

D: Well, nowadays people are choosing not to have children because they don’t want to bring them into the world around us right now.

J: Yeah, I used to think that I would never have kids. You know, but I was lucky enough to meet a really beautiful, strong woman and we were together for ten years before, well ten, twelve years before we decided to do it and she’s been with me through the worst time in my life….and the best. Now we’re living the best part of our lives and it’s like I never ever wanted to have kids, but my life feels so much bigger. And on one side it’s terrifying that she going to grow up in it, but on the other side – what’s the potential, you know? I mean, there is potential and you know I don’t get into politics very much anymore – I used to, but the gloves are off and it’s not fun anymore.

J: It is terrifying, I mean the supreme court thing – that’s what has worried me the most. The supreme court is political appointees basically and I just don’t see the balance. Anybody can be a very very neutral jurist, but I just don’t know. Because your moral, your values, your beliefs are going to influence your interpretation of the constitution and the laws of the country. I completely believe in a woman’s right to choose and I grew up in a house full of women and I was the only boy. By default, I got stuck being a feminist whether I wanted to be or not. (laughter) You know, I hated girls!

D: (laughter) But you understand us so much more now…

J: No, no women are these amazing, beautiful things with too many moving parts. I don’t know, it’s always a mystery. I guess that’s why I love ‘em too.

D: Well it sounds like you found a pretty great partner in your wife.

J: She’s strong you know, she’s strong. She’s ok with me being gone.

D: So they don’t travel with you when you’re on tour?

J: Sometimes. Sometimes. She (Lili) is getting old enough to come with us, but then it’s exhausting. She’s wakes up at 6:30 and she stares right in my face and says “Hi Daddy”. (laughter) Uh oh! – you’re getting up and she wants breakfast and then our favorite game when we’re traveling is I bought one of those big red kickballs you know the ones that make that sound, “donk!” And she loves this ball so her favorite game is to go out in the hallway of the hotel and I kick the ball down the hallway and she chases it. And we just go back and forth and back and forth kicking this ball.

D: Wear her out for naptime!

J: Wear ME out for naptime! (laughter)

D: So now, with her being almost 2, does she have a favorite song that she likes to hear?

J: No. You know, she came to a show and she actually stayed up long enough to see the show. And when she’s angry or scared she opens her eyes up really wide and she balls up her fists like she’s going to punch you or something. And she looks at me and she gave me the fists and I’m like “what?!” I’m right in the middle of the show and I’m like “what are you doing to dad? What’s wrong with you, kid?” (laughter)

D: I guess that’s not what she wanted to hear right then, dad. (laughter) So with you having the daddy- fever and everything, are you interested in writing for anymore family features like you did with Treasure Planet?

J: I mean, if somebody offered me something, yeah. And you know, I don’t want to exploit my daughter in writing music. I don’t think I’m gonna be….they call it “daddy-rock.” And I’m just like “nah, I don’t think so.”

D: It’s not uncommon for musicians to come out with a lullaby album after they’ve had some kids.

J: Well, it depends on my financial situation, but you know. I never say no to nothin. (laughter)

D: It’s been a decade since you were inducted into the songwriters’ hall of fame. Which is a very prestigious honor and certainly validation to your musical abilities. And most accomplished musicians have a good story about the moment they’ve realized they “made it.” So what’s your story?

J: When I realized I made it?

J: Um, when I was standing in front of Mount Rushmore and I got a phone call from my business manager, my accountant and he said “why didn’t you tell me you never paid your student loans back?” (laughter) and I was like “cause I never planned on paying them back.” And he’s like “No, no, no, no. You’re officially middle class now. You are paying off your student loans!” (laughter) And then he hung up on me. I’m like “ wow, I actually had the money to pay back my student loans. That’s cool.”

D: (laughter) I mean, that is definitely a “made it” moment if I’ve ever heard one.

J: Listen, you know you’ve made it if you’ve paid off your student loans. (laughter)

D: That’s awesome. Thank you so much for taking the time to talk to me.

J: Right on. It was nice talking to you.

D: Well, you guys have a wonderful rest of your day and we look forward to seeing you October 28th at the Uptown.